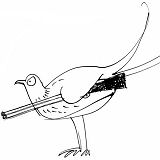 I'm often filled with a sense of dread when recommending places to friends, which is why I will endeavour to make my reviews on here as honest and also, as critical as possible.  I dread sending someone to a restaurant where although I had a fantastic time, I know full well they could end up spending their hard earned cash and having a nightmare of an evening, leaving them to hate me more than they already did.  This however has never happened with Bully's, it's just not that sort of place.
On their website they explain the etymology of the the table d’hôte as originally being a farmhouse that welcomed friends and fed them well, and although it's cliched, dining at bullys does feel as though you're being welcomed into the owners home. The interior on first glance looks jumbled, even tacky but on closer inspection is actually idiosyncratic. A framed fat duck menu and various receipts from what I assume were the owners memorable trips away decorate the walls along with various pictures and nic-nacs, and a bar piled high with  food and wine reference books. It also has touches of real style from the frontage that reminds one of New York to the brilliantly understated drawings on the place mats.

The food I’ve had here has never been anything less than exemplary although my girlfriend did recently have a squid and chorizo starter (we seem to have ended up regretting that choice recently) that was a complete abortion.  The squid was tough as leather and the chorizo amounted to one micro-thin solitary slice. To be completely honest with you, I’m not entirely sure why we didn't send it back to the kitchen and I’m quite annoyed in hindsight that we didn't, as bullys is the sort of place that strives for better service and this rare glitch I’m sure would have been taken care of for us.

Every now and then, the owners like to have what they call a gourmet night, and since we had enjoyed the restaurant so much, we thought we'd sign up and give it a go.
The evening is structured around a "seven course" menu (the inverted commas there are me being pedantic, as I don't believe that an amuse bouche, nor palate cleansing sorbet should really count as a course) with each dish accompanied by a wine pairing.
We arrived at seven on a Thursday evening and sat down at a table loaded with various wineglasses, one of which contained a sparkling wine. Before we came here we weren't sure of how the night would pan out and whether or not we would have to buy more wine to keep us going between each course, but we soon found this wasn't to be the case, for as soon as our champagne flutes approached empty, the staff were on hand to top us back up. We knew right then that we were in for one hell of a boozy evening.
Our hosts for the evening were the owner’s son Russell and the lovely wine expert Hannah. Both of whom showed an incredible enthusiasm for, and knowledge of, what we were to be served.

The first dish out was the amuse, and it was for me the real highlight of what proved to be a really great night out. An espresso cup of courgette and garlic soup came topped with a drizzle of smoked oil. The smokiness hitting the nose before the beautifully rich and deep soup hit the tongue. This really is a fabulous creation and I can only hope to see it on the menu as a starter in it's own right, as it's far to good to stay confined to amuse status. I'm afraid I can't go into the wine parings as my knowledge of wine is practically nil so I’m afraid I’d do a disservice to Hannah, who took so much time to explain each one. Suffice to say that everything we drank that evening was delicious and plentiful.

Second out of the kitchen came an anchovy and olive tart, which I really couldn't make my mind up about. The anchovies were the best I’ve ever tasted, but their heavy umami savouriness contrasted too strongly with the sweet olives and tomato sauce that accompanied the tart. It felt like eating two different dishes in one, and was not something I’d be in a rush to order again.
The fish course though got the evening back on track. A thick chunk of halibut came on top of fine haricots verts and surrounded with vanilla sauce. Everyone on my table agreed that the fish was perfectly cooked, and the vanilla was a suprising accompaniment but worked well with the robust, meaty fish. I did feel that the dish needed another component, something crispy or crunchy to complete it, but nonetheless it was a fine dish.
It was now time for what was to be the most booze drenched dish I’ve ever been served. A Bombay rum sorbet served in a martini glass, drowning in alcohol. The rum was lovely as was the sorbet but it was all too sweet for me to finish so I ended up passing it to a friend who happily polished it off.

The main event was next and we were presented with the meat course of lamb shank in a meaux mustard sauce, with roasted root veg. Russell had introduced the dish as a refined, petite lamb cutlet, but what we were served was a gorgeous hunk of meat on the bone speckled with the mustard seeds of the sauce. This was how all lamb shanks should be. Our knives were un-called for as our forks did a grand job of teasing the tender meat of the bone, revealing the sticky, succulent fat. I loved this piece of meat to such an extent that I ended up picking the remnants from everyone else’s bones so that none would go to waste. The carrots were cooked to perfection, all sweet and caramelised but I thought the potatoes would have been put to better use mashed, as this dish was crying out for creamy mashed potato. All in all a bloody lovely dish.
We were all by now feeling very full, and very, very pissed when out came the cheese. A wooden board contained two cheeses, a grossmont and a beaufort. The former being soft and brie-like almost buttery in consistency and very mild. I adored it. The latter was far too strong for a cheese wuss like me, but everyone else seemed to prefer it, even if the smell of trench foot it gave off lingered in the air long after the platter was removed.
Finally after a very long and enjoyable evening we were served desert. The best way I can describe it is as a deconstructed snickers bar. A bitter dark chocolate, surrounded by a salt-caramel sauce and peanuts. It was a good dish, but I personally found the chocolate too bitter, although no one on our table failed to polish it off completely, some even rubbing their drunken fingers through the remnants of sauce left on the plate.

By the time we paid our bill and ordered taxis, we'd been in Bully's for four hours and what a four hours it had been. I was lucky enough when in New York to eat five courses at a michelin starred restaurant for just $50 (at the time £28) which was an absolute bargain, and Bullys gourmet night comes a close second in terms of value for money. I did have a few niggles with the food, but it was on the whole very good, and we were all wowed with the generosity when it came to topping up glasses. If you get the chance to partake in one of Bullys gourmet nights then I suggest you grab it with both hands. I will definitely be at the next one, although I know now to take the following day off work to recover

hungry in cardiff
Increasingly obsessive foodie, who likes to cook, loves to eat out and has decided to write about his experiences with food on this blog, to help break the monotony of an otherwise boring and pointless existence.